Well, I guess it was midnight somewhere at the time...

Well, I can answer that question in a myriad of ways. Instead, I opt for a short synopsis:

For some reason, I was trying to send mail back and forth between one of my accounts to another. That's when I found this out:

It seems that afn.org's mail server is being blocked. It will receive mail, but is not being allowed to send any (as judged by that line in parentheses above--128.227.74.44 is an IP address for ufl.edu, University of Florida, where AFN is housed). How I have my mail set up is that anything sent to stingray at afn.org will forward to stingray at freeshell.org (which is why you see the freeshell.org address up there).

The layman's summary of all this is if you are trying to send me mail (as once before), I ask that you send it to stingray at freeshell.org. 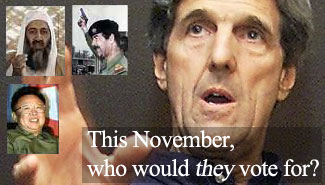 It kind of makes you think, does it not? Who would our enemies vote for (assuming they could vote)? Why?

Perhaps it's because he wants to bring in a "coalition" that supports our enemies (ahem, France).

Perhaps it's because he would act reactively to terrorist acts instead of taking the fight to them...you know, keep them occupied off of our soil!

Perhaps it's because they think he's a nicer guy; well, I hope they don't like our president since they are our enemies.

Perhaps it's because they'll assume that, if in power, he'll do more for their cause than they could back home (cf., his post-Vietnam testimony before Congress and the effects it had on the Viet Cong torture of his "comrades" back in country).

Do you get the feeling that John F. Kerry as president sickens me?

Hurricanes Charley and Frances have devasted much of my former home state. I still have close ties to Florida, as much of my family still lives there. This may go down as the most expensive one-two hurricane punch of all time. Charley's abnormal course and Frances' slow movement aided in this.

What concerns many people, including myself, is that a third punch is waiting in the wings. Hurricane Ivan is in the Atlantic and is projected to make its way toward Florida. By the time it reaches the Peninsula, the experts predict it will be a category 4 hurricane. It is predicted to impact the Bahamas and Florida at about the same places as Frances has/is.

There's something we can do to help. Cleanup and repair cost money. Housing the homeless victims costs money. Feeding those who have no power costs money. You can donate. Please, find a way you can lend your aid. If you're in the area or close, pitch in with some man hours, if you can spare some. If you have the financial means, donate through whichever organization you wish. In any case, lend your moral support and pray.

My suggestion for financial support should be directed to LCMS World Relief's Hurricane Charley Fund. Information in that link will give several options for sending money in order to aid Bahamans and Floridians in relief and recovery from these two (three?) storms. Please consider a donation if you are able.

I'm going to preface this by saying I'm white and I DON'T hate blacks; what I hate is racism...across the board.

What is sparking this? How much the media has gone ga-ga over Mississippi State's hiring of Sylvester Croom as their football coach. He broke the "color barrier" in the South Eastern Conference; he is the first black head coach in SEC Football history.

I've ordered a Toshiba e805. You can view my purchase here.

Now, I wish to poll what to name the computer.

Okay, its backlight is dead.

» Name: Rev. Geoffrey A. Wagner
» Occupation: Pastor [LCMS]
» Location: Marion, South Dakota
» Quote: I always recall one from C. S. Lewis: ...[It] is not the remembered but the forgotten past that enslaves us.
» More Info: Read here
Search Stingray's Old Blog:

A link to give money to the LCMS World Relief Hurricane Charley Fund (also in relief of Hurricane/Tropical Storm Frances and Hurricane Ivan, if it gets to that).

One of my philosophies is never to look a gift horse in the mouth. Of course, that only goes so far. If you, for whatever reason, would like to gift me with some of your money, here is an easy way to do so.
Atlantis is copyright to
Möbius HTML Design
[copyright statement]
stingray at afn.org
© MMIII, MMIV