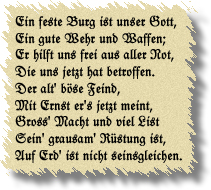 Freedom...that's what today means. That's what Martin Luther started to declare to a world in captivity--a church in captivity--nearly 500 years ago. "You're free! You're free because the Son has set you free!" And if the Son sets you free, you are free indeed.

But what about freedom? What is this captivity? They are not slaves, they are not in prison...of whom are they captives? "I tell you the truth, everyone who sins is a slave to sin," Jesus said. But Jesus also said much more: "Now a slave has no permanent place in the family, but a son belongs to it forever. So if the Son sets you free, you are free indeed." That's it, end of story, no need to go further.

Though, nearly 500 years ago (longer, even), some decided they needed to. Instead of heeding Jesus' gracious call to freedom, they decided to tunnel their way out of captivity. The Church in Rome thought it a good idea to charge a fee for freedom. "By this indulgence," they delcared, "you can earn your freedom, so many years out of purgatory, a quicker entrance into heaven!" The saying actually went, "As soon as the coin in the coffer rings, the soul from purgatory springs."

Even for them, however, the Son of God has proclaimed freedom. With his nail-scarred hands and feet and a body ravaged by beatings, he bought our freedom for us. With his own precious blood, Jesus set us free. "So if the Son sets you free, you are free indeed!" No indulgence needed!

The Son has set us free, not with silver or gold, but with His innocent suffering death. No might of ours can do it; our loss would quickly come. Only the Son can set us free, free from bondage to sin and to life everlasting. By His release, we are made sons of God, fellow heirs with Christ--we who hear and believe, we who continue in God's Word. For it is that Word of God that sets us free. "You're free," He proclaims. And if the Son has set you free, you are free indeed.

I'm sure you've heard it all before. Kerry is against outsourcing and his wife is part of a company that outsources. Such hypocrisy! Well, here's the thing...

Steve Spurrier is reported to have said that hell would freeze over before he returned to coach at Florida. This reportedly took place after he left for the NFL in 2001.

Yesterday, the Boston Red Sox won the world series. Hell must have frozen over!

This has been mentioned on numerous bulletin boards, it is not originally my idea.
| 28 October 2004 10:45
no comments yet

***BREAKING NEWS*** As broken on our message boards earlier this morning, Coach Zook and his staff have been informed that they will not be with the program at the end of the season. However, they'll coach the remainer of the games, including a bowl game (if any). A press conference has been scheduled for 4pm today and it will be broadcast live on Sunshine Network and GatorVision on Gatorzone.com. Zook, Foley, and President Machen will be present.
Gator Country

They can take down the website and box up the T-shirts. Ron Zook's tenure at Florida is over. The Gators coach was fired Monday, but is expected to finish the season. An upset loss at Mississippi State was the final straw for the embattled Zook.
ESPN.com

For a couple of years now, I've been saying, "Give the man a chance." Well, I think he's had his chance. He blew it. I am talking of Ron Zook...

Listen to anything coming from the Kerry campaign, and that about sums things up. Take the flip-floppiness of the senator himself, add that to whatever anyone doesn't like about Bush or his policies, and Kerry will pounce on it. And the most he ever says is "I have a plan."

I have added three sermons to the site. If you wish to read them, please select "Sermons" from the menu above. The new sermons will be marked "NEW" in the menu that is created.

Oh, and I also added a picture to one photo album (it should be easy to tell which one)...this was something I was asked to do and never got around to doing.

I told you I would be tweaking the site every now and then. Well, look up at what I call the "Jump List" (where the Link Dump and Here's Your Sign journals are listed). See! I made it tell when they were last updated! Cool, huh?

Now, I've completed work on the mobile version of Atlantis. If you wish to view it, click here. Bear in mind, though, it's really only a fraction of what the non-moblie site is.

Yes, with this entry, the return of the hymns section has happened.

It seems, from my end anyway, that everything is working as it should. If you find anything that seems "out of whack," let me know; my email address appears in all of my journal posts. I'll be tweaking things now and then--I may make some changes to the font of the random quotes in the upper right corner, I may change the order in which sermons, hymns, and poems are sorted, and other small things here and there. The tweaks are superficial, however, some may never be noticed (except by me).

Now, there is officially NO IE FRIENDLY version. Atlantis is now completely Mozilla, Netscape, Opera, and Internet Explorer friendly, without different versions. There is also no mobile version, but I have plans for one that should be pretty easy to do, considering the "flat file" type of changes I made to everything else in here.

We have development on Skin Mobile to thank for the changes here...some of you may have noticed the resemblance...

I was toying around with ideas for where to put these. The best one was in the sidebar. So, the Link Dump and Here's Your Sign Journals are back in their proper places. You can jump directly to them from the "menu" above.

Lo and behold, sermons and poems are now available! I almost feel like conquering the hymns yet this morning (as early as it is), but I may leave that until tomorrow.

In the slow process of getting everything changed and updated, the Photo Albums have miraculously reappeared! Simply click the link above (the one with the camera next to it) and view the pictures we have in the albums.

No new pictures (yet). That kind of updating will take place when the site is up to specs. However, there is a new tip included in the "sidebar": if the sidebar is covering a picture, make the picture smaller (that's what those buttons with percentages in them do).

Well, I got tired of this cluttered look...yeah, I still thought the last new look was cluttered. Anyway, this is the new look for the site. It's pretty neat, I think. Some things don't work yet, but they'll be here soon enough. Enjoy!

Oh, I'll also be tweaking the look of some of the other things while I'm at it. Sooner or later, everything will look like it fits...since some things kinda don't right now.

If something doesn't seem to work like it should, let me know (because I might not otherwise know or find out for a while on my own).

You will see in the top right corner of (most) of the journal entries something that looks like this (colors not withstanding):

Well, here's what those things mean, in case you wanted to know:

So, there you have it. That is, in case you were wondering...

Well, I've been working on this little beauty for a while. As I finally have a "skin" to release, I have opened the site. Check out my new website--Skin Mobile--right here. The site is currently a subsite of Atlantis, but I do hope (for now) to let it loose on its own.

Christopher Reeve just passed away, and America just lost a great champion for this cause, somebody who was a powerful voice for the need to do stem cell research and change the lives of people like him, who have gone through a tragedy. Well, if we do the work that we can do in this country, the work that we will do when John Kerry is president, people like Christopher Reeve are going to walk, get up out of that wheelchair and walk again.

It's a shame that lies like this are continually spoken, this quote by John Edwards. It is perhaps more a shame that countless naïve people believe it. (full entry)
| 13 October 2004 23:36
two comments

It has been a while since I have posted something here. Well, it now being October 7, it seemed like a good time to post something.

This post is about something that is missing. Sure, there are fixes available. I could play the video game version. There are minor leagues available. But I just spent time a few months ago celebrating what had happened with a favorite of mine. I was hoping to be able to watch a defense of it...


» Name: Rev. Geoffrey A. Wagner
» Occupation: Pastor [LCMS]
» Location: Marion, South Dakota
» Quote: I always recall one from C. S. Lewis: ...[It] is not the remembered but the forgotten past that enslaves us.
» More Info: Read here
Search Stingray's Old Blog:

This almost seems like advertising to rent somewhere else. Perhaps all it needs is a little more punctuation. You know...there may be a better place to rent.

One of my philosophies is never to look a gift horse in the mouth. Of course, that only goes so far. If you, for whatever reason, would like to gift me with some of your money, here is an easy way to do so.
Atlantis is copyright to
Möbius HTML Design
[copyright statement]
stingray at afn.org
© MMIII, MMIV